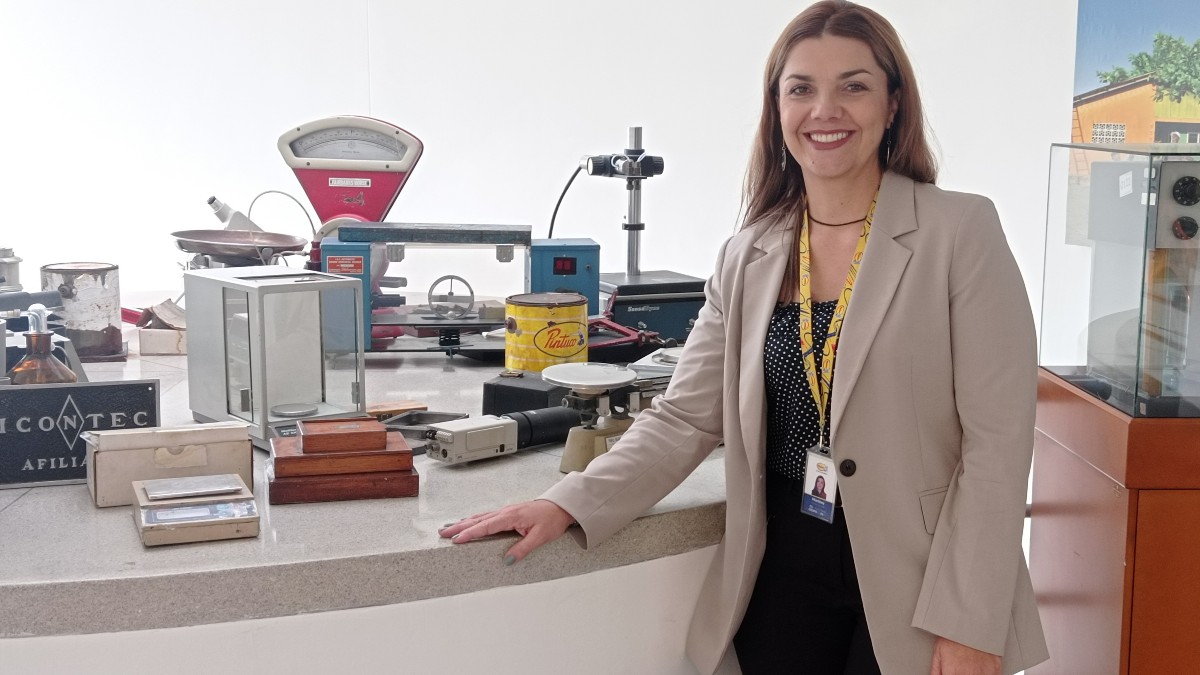 Beyond her role as Pintuco's senior R&D manager, Marleny Yepes' life is an exploration of opportunities to project the best of every being around her.

At the entrance of the building of the Research and Development Unit of the Pintuco factory, located on the side of the road that connects the municipality of Rionegro with the Medellín-Bogotá highway, is captured the image of a boy explorer, who has his eyes set on a series of pieces to assemble. From there arise sparks of painting that transcend the mural as a sign of an overflowing and spontaneous inspiration in that curious experimentation of reality, just like the spirit of every researcher.

"I believe that chemical engineers have an innate curiosity," says Marleny Yepes Duque, a chemical engineer by profession, who keeps this image fixed on her LinkedIn profile, accompanied by a phrase from Spanish researcher Jorge Wagensberg: "Changing the answer is evolution, changing the question is revolution."

That mural, which serves as a background for the photo of every visitor to the Pintuco factory, is the one that Marleny visualizes every week since March 2021 when she assumed as senior manager of the Research and Development Unit (R+D) of the company. Her gaze is curious and creative, such as the one that identifies the 60 professionals who make up the Unit that she leads; 44 in that headquarters in Colombia, ten in Costa Rica, four in Ecuador and two in the Antilles.

In the Unit there are formulators and analysts who support the development of each paint line (walls and architectural structures, wood, building maintenance, industrial, automotive, powder coating, signage, marine, among others). Each of them he respects and admires, and from each one he learns, as has been his lifelong maxim.

Every so often he repeats that the average seniority in the company of the R+D team is 23 years, which he recognizes as an accumulated advantage of Pintuco. "They are people with an impressive experience, who have understood how the brand works, what are the attributes that people and customers value most, who defend the quality of the product, who always want us to be the best in the market," he says.

His predecessor in office had 35 years of experience in paintings, which proved challenging upon his arrival. Despite her performance in research and development, she knew there was a gap in technical knowledge that she could only narrow from her usual formula: asking and listening, and studying with the same enthusiasm that has characterized her since her career choice.

No limits to learn
"A child exploring is also a forceful invitation to overcome the limits and go beyond and break the schemes", says the legend next to the drawing that frames the R+D building. At the same time, it is the vision that Marleny keeps from her school days, when in her last year she was debating between studying psychology or chemical engineering.

That "inner question to understand everything: the human from psychology and the world from chemistry" would become the transversal axis of his life trajectory. In the end he would lean towards chemical engineering which, as he explains, differs from pure chemistry by the knowledge not only of the molecule and its interaction with different chemical products, but by how it becomes an industrial process.

"I want to understand how things work: the universe, clouds, water, electrical energy, and I think chemical engineering has that," he told the directors of the faculties of chemical engineering of the different universities he visited, who validated that appreciation and ratified his decision. Some time later, this link with the National University would reach a business nuance for the promotion and generation of new knowledge.

Connecting the dots
At the end of his university stage he would do two professional internships: one in Ecopetrol and another in AkzoNobel, where he would leave very good impressions. However, her first steps in research and development would be taken in Colchones Comodísimos, where she would recently develop, together with her analysts and allied supplier, the foam of one of the company's stellar products: Memory Foam foam.

Later, he would work in the engineering company Tepsa (today Ondina). There he would be in charge of the design of a fumaric acid production plant in Mexico for the company Andercol, belonging to the Orbis Group, such as Pintuco.

After that, and after passing through the health and safety area of Colorquímica, he received a call from AkzoNobel with a vacancy proposal as head of special projects. Marleny gladly accepted, but not before notifying that during the practice held there she had met Anderson, a maintenance engineer who after a year and a half of courtship had become her current husband.

From the multinational they gave him a part of tranquility by indicating that, since they were not part of the same area, there was no conflict. So, even though her husband worked at the plant and she usually worked in the offices, they occasionally coincided. That was part of an unforgettable work stage that lasted nine years.

During that time, Marleny went on to assume the direction of Business Development and work hand in hand with the Research and Development area, which "always has to be on the side of the company's strategy". The strategy was to diversify the company's portfolio with the same raw materials. This required researching and reviewing patents, and why not do it hand in hand with universities?

Marleny's proposal arose when there was hardly any talk of the relationship between university, business and state. Then alliances arose with the National University and Eafit to build projects today known as open innovation. Hence, the company became the first to produce biodiesel in the country and by-products were generated for use in the industry itself.

This collaborative work has been one of Marleny's premises in each of her professional stages, which she also adopted upon her arrival at Pintuco, which since April of this year also belongs to AkzoNobel.

"And I think that is the dynamic that the paint sector has also taken: initially they were to decorate, give color, protect; now, more and more, the dynamic is transforming towards giving functionalities to these paints and coatings, "says Marleny in relation to the contributions of other knowledge, beyond chemistry, that can provide new attributes to paint to be offered to a new consumer.

In this way, together with the different suppliers and other allies, paints have been configured that can change color with a certain temperature, some that are usually more resistant to bacteria, among other new products (see box), "because the world has been changing, so paints have to start adapting their functionality".

Transforming lives
Similarly, Marleny has adapted her social function at each stage of her life, based on an unmistakable seal of R+D: inspiration plus dedication. The one she had since childhood when collaborating in a warehouse of her father, and later as a volunteer of a foundation for children in vulnerable situations called La Casita de Nicolás, located in Prado Centro, in Medellín.

Her love for babies led her every Saturday for eight years to carry out this volunteering, which would continue from her participation in a youth group of the school of which she is a bachelor, Calasanz. Even after graduating, along with some fellow students, she continued to be linked to the social works of the institution.

However, in the midst of some spiritual retreats, they proposed to create a permanent project in a marginal area of the city for the formation and empowerment of children and adolescents. This is how the Talentos Calasancios house was born, located in Comuna 13 of Medellín, where girls between 7 and 16 years old receive an accompaniment that goes from assistance in the realization of school tasks, while their parents work, to the formulation of a life project. The idea came almost along with her role as a mom.

15 years ago her son Sebastian was born, who from her womb already accompanied her in swimming, the sport she welcomed after dedicating herself in school and university to volleyball. Hence, with just four months he was allowed to enter the Antioquia Swimming League, where he has trained since then.

He would be followed by his twelve-year-old daughter, or rather swimming. Both are high-performance athletes and very good students. For this they maintain a discipline cultivated in the home, where it dawns at 4:30 a.m. and the lights are turned off at 9:00 p.m. Daily three-hour workouts are sometimes doubled on competition days.

Even with that dedication to her children, Marleny's volunteering endures even if it is with her dedication to the foundation itself every fortnight. However, through the Pintuco Foundation he has found another space in which the company radiates this social transformation.

"Color transforms," he says. And this is reflected in communities such as Usiacurí (Atlántico), Quibdó (Chocó) or Venecia (Antioquia), where in alliance with public and private entities, Pintuco (today AkzoNobel) develops projects for the improvement of habitat and the installation of capacities among the inhabitants themselves.

It is a task in which, as Marleny emphasizes, a whole team of people participates, whose dedication and daily work have transformed their lives and environments through color.

Product of innovation
"Color development is Pintuco's added value," says Marleny Yepes, Pintuco's senior manager of Research and Development. This is supported not only by the company's 6,000-color chart, but also by the products derived from the sum of accumulated knowledge of the company's members.

Among these is the coating system developed for the Colombian Air Force, which meets all international standards that need a high quality paint for helicopters.

To this is added the Biocuidado paint, the first in Colombia effective against the Covid-19 virus. The walls of the laboratories of the Research and Development Unit are covered with this.

It also highlights the acrylic paint Alta Asepsia, specialized for operating rooms. This is formulated with a powerful bactericide that drastically reduces the formation of colonies of fungi and bacteria on painted surfaces.

On the other hand, antifouling paints generate antifouling protection for medium and small boats. This prevents microorganisms from adhering to them and anything that can stop them, while preserving the marine ecosystem.

Madetec Aqua also stands out, a water-based, environmentally friendly product that protects and decorates wood for indoor use that is not exposed to direct sunlight. It is resistant to splashing liquor, alcohol, vinegar and food.

Finally, the formation of an entire color system has been an innovative development of Pintuco, because it does not depend on the exports of dyes, but the company itself formulates them.

No thoughts on “An explorer of innovations”