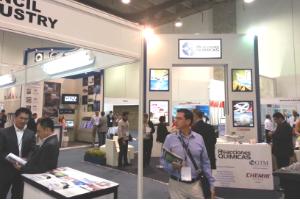 The Latin American Coatings Show once again brought together the entire paint and coatings sector in the region. We analyze the present of a show that is going through a stage of transformation.


Mexico was the object of all eyes of the paints and coatings industry, because on July 17 and 18 it hosted the Latin American Coatings Show (Lacs) 2013, an event that in this edition stood out for the massive participation of companies from China.

For Lacs, this year would be the measure that will condition its future, because due to a series of differences with the National Association of Manufacturers of Paints and Inks (Anafapyt) this entity no longer participates in the fair, and even decided to hold its own meeting held a month before.

for this reason, Lacs had to continue without this important support the realization of the traditional fair in which thousands of Mexicans and other foreign visitors meet in order to know the latest trends in the sector.

Mexico is one of the countries with the highest consumption of paints and coatings in Latin America, and is only below Brazil in the leadership of this segment, which is why INPRA LATINA was present at the World Trade Center to talk to the participating companies and learn about their expectations both at the fair and within the Mexican and Latin American market.

We spoke with the engineer Miguel Ángel Montoya, representative of the Mexican company Westek, who was satisfied with the participation in the fair, because they consider that their potential customers came to their stand and for them it is something quite beneficial. "This is a good fair for us, because we have the opportunity to show our products and at the same time publicize our technical service, calibrations and accredited test laboratories."

Michelangelo was struck by the high presence of Chinese companies at the fair. "I see quite a few Chinese companies, something that I don't remember happening in previous versions, but for us it's fine, because they are not our competition and in my opinion their participation energizes the market."

Another of the companies related to analysis and inspection issues is Intertek, which through its subsidiary in Mexico was also present in Lacs with the best expectations and with positive results.

Teresa Imelda Ruiz, commercial executive, commented that "we are very happy with the participation in this show, I think we have very good business possibilities thanks to the scope that our company has in Mexico."

Additionally, Teresa spoke about the importance of participating in this type of fairs: "These meetings serve to reinforce the image of the company before our customers, the results were positive."

From the United States, the chemical company Air Products was present, which continues to increase its participation in the Latin market, and takes advantage of Lacs to increase its presence in this scenario."

Chris Henkee, marketing director, commented that "for us Mexico is a very important country with a fairly high growth in the paints and coatings sector, so we are at this fair to expand our contacts and generate new business".

Henkee also highlights the participation they have in the rest of Latin America, since they are in Argentina, Brazil, Chile, Colombia, Ecuador and Peru, so they always seek to be in this kind of shows in the region.


China's participation
With around 20 companies, both the attendees and the rest of the exhibitors were struck by the number of Chinese companies that traveled to Mexico to publicize their advances and technologies. We saw pigment companies, different types of resins, and even manufacturers of dispersion equipment, mills, mixers, among other technologies.

However, the companies with which we had the opportunity to talk, agreed that this fair did not meet their expectations in terms of attendance. However, it should be noted that Latin America continues to have a low number of professionals who master other languages, and perhaps this was one of the reasons why Chinese companies were not visited more frequently, since in their great majority, Chinese representatives communicated through English.

John Lee, commercial director of the pigment company Ceval, stressed that his company is quite interested in strengthening its participation in the Latin American market and that for that reason it was present at Lacs, however, he was dissatisfied with the attendance of the public at the event. "We expected to see many more people at the fair, however, we managed to get important contacts to work on in the future. We will analyze the possibility of continuing to participate in the next editions."

A similar diagnosis was made by Alina Chan of the Shanghai-based company called Siehe, which already has a significant share of the Latino market, especially in Mexico. Chan expressed dissatisfaction with the participation in the fair and questioned her return to the event. "The truth is that we expected a greater attendance of people at the event, we will study our return."

The positive thing is that the interest of Asians continues to increase, also highlighting India, to enter Latin America, with the difference that they now invest in the fairs to have a much more direct contact with the client, which improves much more the image of the company and moves it away from the stigma with which companies from China have loaded in terms of the quality of the products that Manufactured.

Finally, we consider that this fair was different from the other editions of latin American Coatings Show, we will wait to know what will happen for the year 2015, when we will realize how this historic and recognized world fair will evolve. Hopefully everything that happens is for the benefit of our industry.

One thought on “Mexico attracted the eyes of the sector”