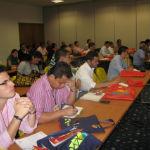 After diversifying its audience, Cubrecol Americas is consolidated as the event with the greatest projection for the paints, coatings and corrosion control industry in Latin America.

The good results continue to profile Cubrecol Americas as the stage for the technical and commercial update par excellence for the paint sector. One of the main reasons for the success is that it is the only event that brings together in a single scenario raw material suppliers, coating formulators and distributors, equipment suppliers, corrosion contractors, inspectors and coating applicators.

The eighth edition, which was held last September in Medellín, Colombia, was attended by 150 attendees of the academic program, more than 630 visitors to the commercial exhibition, 16 exhibiting companies and 20 speakers from Colombia, Argentina, Mexico, Spain and the United States.

Innovation played a leading role during Cubrecol Americas 2011. For the first time in history, the event redefined its thematic structure to give each attendee the most important information for their work.

Thus, three rooms were structured, each with a specialty: formulation, application and corrosion control. In the first, topics related to the management of raw materials, new technologies in paints, environmental control and marketing of architectural paintings were addressed.

Meanwhile, in the application room I talk about pretreatments, advantages and disadvantages of new painting systems, application schemes and more recent technologies. As a complement, the corrosion room addressed the problem of corrosion in the oil sector and in other basic segments such as infrastructure and energy towers.

Seeing you also learn
But there were not only keynote speeches. During the day before the start of the fair, several attendees had the opportunity to visit industrial facilities and coating testing laboratories.

The first group, made up of 25 people, toured the facilities of the Invesa - Sapolín plant in the municipality of Girardota, located 40 minutes north of Medellín, where architectural, industrial, waterproofing and adhesive paints are manufactured.

During the tour of the production plant, José Ignacio Arango, marketing and sales manager of Invesa-Sapolín, said that "thanks to this initiative we have the opportunity to share with other companies close to our sector, to have a continuous improvement that allows us to work with a spirit of cooperation that benefits the development of the industry".

Arango pointed out on the issue of the state of the Colombian market compared to other Latin American countries that "we have competitive advantages in terms of the production of paints, although Colombia needs a greater development of infrastructure, especially roads, to enhance the development of all economic sectors"

Another of the scenarios that welcomed the visitors of Cubrecol Americas 2011 was the Corrosion Laboratory of the Corrosion and Protection Research Group of the University of Antioquia. In this visit, attendees were able to learn about issues related to attack mechanisms, individual and combined effect of atmospheric pollutants, mapping of atmospheric corrosivity in areas of regional and national interest, corrosion indoors, in packaging and in transport conditions and laboratory simulations, which are the research axes that the group has today.

Maryory Gómez Botero, who was one of those in charge of guiding the group of visitors, stressed that "the services and studies that we carry out here at the Corrosion and Protection Laboratory of the University of Antioquia are of a public nature and are available to the industry. We provide advice and intervention in prevention, management and control of corrosion; as well as characterization of atmospheres, training, simulation tests, laboratory tests under international standards, among others".

Finally, a group of 10 coating applicators toured the production plant of the Global Paint Company, Pintuco, in the municipality of Rionegro, located east of Medellín.

There, and with the help of Robert Gil, who belongs to the Production area, visitors toured the water-based manufacturing plant, became familiar with the mixing and dispersion equipment, the coloring lines and the packaging line that has a weight control system and calculation according to the number of diluted solids.

Later the attendees visited the quality control laboratory and the powder coating plant, where they participated in some tests to control the physical characteristics and resistance of specific products.

Later they saw the control room of the industrial plant and the system of storage and distribution of raw materials; and ended with a visit to the laboratory and formulation building, where they saw different physical and color tests that are usually performed on the paintings manufactured by Pintuco.

Positive balance
After finishing the two days of academic talks, visitors to Cubrecol Americas shared their perceptions of the event through a survey. The subsequent analysis of this information showed that 23% of the attendees said they were very satisfied with what was found at the fair, in general terms; while 48% declared themselves satisfied. Even 91% of attendees said they would recommend the contest to their friends and colleagues.

Among the talks with greater acceptance is that of the Argentine Juan José Caprari, member of Cidepint, who exposed to the attendees the novelties in terms of VOC control in the formulations. 86% of the attendees said that the quality of the contents presented by the engineer Caprari was excellent or very good.

The nanotechnology also caught the attention of the attendees, who with the help of the Colombian engineer Julián Restrepo were able to analyze the novelties that are offered today in the market. 90% of those who were at that conference considered it to be excellent or very good.

Quilyam Casallas, president of Ascor, also surprised those attending his talk on corrosion control in road infrastructure. All the participants in the talk considered that the level was excellent or very good. Exact situation was repeated with the engineer Juan Guillermo Maya of ISA S.A, who addressed the issue of corrosion control in power transmission lines.

And the novelty of the event was borne by the Argentine Claudio Fazzone, who for the first time addressed issues concerning the marketing strategies of paintings. 97.3% of the people who participated in the talk said that the contents learned in it were excellent or very good.

To highlight
In continuous expansion
In line with the growth in themes and approaches, Cubrecol Americas has seen its international participation increase. From being an event aimed at coating applicators in the Andean Region, it has become consolidated as a scenario of regional importance, attended by top-level speakers from all latitudes.

In the 2011 edition, international participation grew, both in attendees and in visitors and speakers. From Brazil, Spain, the United States, Argentina, Peru, Venezuela, Mexico, Chile and Costa Rica, technicians and engineers arrived in Medellín to take part in the fair that is already preparing its 2012 version, in which it will repeat the stage.

No thoughts on “The best scenario for the upgrade”